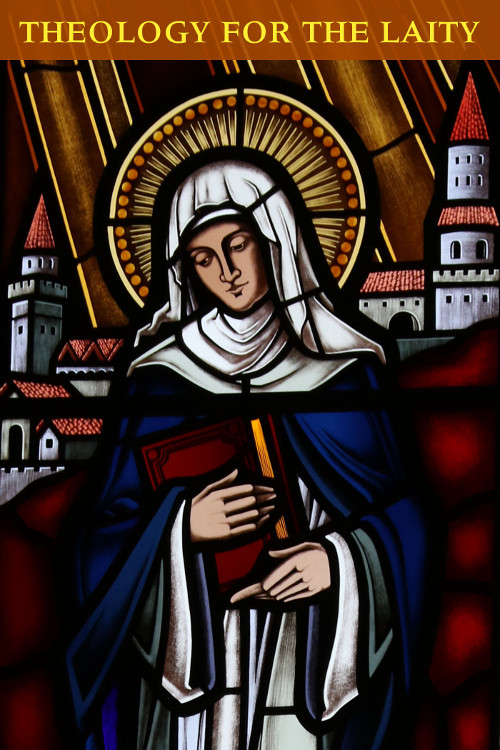 In 1822, the poet William Wordsworth wrote a sonnet called The Virgin in which, though a Protestant, he called Our Lady “our tainted nature’s solitary boast.” The place and mission of the Blessed Virgin in the world has been a puzzlement to many Protestants. Yet Luther held her always in high esteem. Her place in our hearts is expressed well in the Magnificat from the Gospel according to St. Luke in which she says: “All generations will call me blessed for he who is mighty has done great things for me.” Why?

In the book of Revelation, Mary is portrayed along with the Church as “the woman clothed with the sun with the moon under her feet and on her head a crown of twelve stars.” (Rev 12:5) She brings forth her Son but the dragon is ready to devour him. This text is used for the Assumption of Mary; but it can well serve to express the fact that the love which moves all the heavens and the earth to return to God is encapsulated in she who in the name of creation weds heaven again by bringing forth her Son. She is the New Eve. As the original Eve was a virgin who became a mother and fell into disobedience when she received a wicked Annunciation from a wicked angel, so Mary is a virgin who is also a mother. She began the return of the human race to union with God when she expressed her loving consent at the invitation of a good angel in a good Annunciation.

Mary is not only a model of creation returned to God since both her soul and her body now reflect the glory born of divine love, but she is also a model member and indeed the first member of the Church of believers. This is clearly witnessed in Lumen Gentium, the document on the Church in Vatican II. The first four chapters express the nature of the Church as to her structure as a society of God and culminates in what Pope Benedict calls the Church of Peter. This Church is both a sacrament and an institution. But this Church has as its purpose enlivening the human race in the holiness of divine grace. This is the Church of Mary. Reflection on her role as virgin and mother represents the holiness of the Church and the final chapter is dedicated to her as a summary of the document and a final flourish. The Church of Peter or hierarchy exists for the Church of Mary or grace.

The love of Mary is demonstrated in her acceptance of marriage with the Trinity at the invitation of the angel. The angel calls her “full of grace” and invites her to be the Mother of God. He venerates her, a human being, in the complete reversal of all that occurred in the human race up to that point regarding human-angelic relations. He venerates her because she is greater in familiar association with God and greater in the splendor of divine grace. Our Lady surpasses the angels in these things. So, Gabriel says “Hail” to her. The angels know that she is perfectly disposed to all the virtues by the integrity in her soul because she will never experience any sin, either original or actual. Each individual saint excels in one or another of the virtues depending on their character and their weaknesses. Mary excels in them all. She does this not on her own but always in union with her Son and her grace of soul will overflow to her body to make it a fitting place for her to conceive her Son.

This does not remove her from redemption but she is among the redeemed in advance in light of her personal participation in all the actions and sufferings of her Son beginning with his conception until his passion and resurrection. She receives this grace not only for herself but she is also full of grace because her grace overflows to all the members of the Church both present and future.

She is troubled by this greeting and the invitation of the angel to be the Mother of the Messiah because she is a humble person. When she asks how this can be, it is not because she doubts, but she wants a clearer understanding so her consent may be fully informed. The words of the angel are specific and beautiful: “The Holy Spirit will come upon you (The Holy Spirit) and the power of the Most High will overshadow you (the Father) and so the holy offspring to be born of you will be called Son of God (the Word).” (Lk 1:35). The whole movement of the Trinity, begun in creation is completed in Mary as a human being. When she consents in fully informed faith and love, she becomes the sign of the completion of the movement of the heavens and the earth in God. She also reverses the disobedience of Eve born of a lack of love in the annunciation of Satan. She first conceives in her mind through faith and charity and this is so strong that she then conceives in her body without need of human seed. Therefore, she was called the Holy Triclinium, which was a couch designed for three people to lay on while eating, because it is said that the Holy Trinity reclined upon her. Because of this threefold blessing, she is both Mother and Virgin. She is Mother because Christ comes from her body as to his human nature.

Because Mary is morally united with everything he does in her soul, divine grace radiates forth from her. Thus, her purity is not just for herself, but the divine life of grace and purity is also communicated through her to the members of the Church. Her faith must be our faith; her charity must be our charity; her constant intimate life with her Son must be our life. What occurs physically in her conception of Christ and her fiat (“Let it be done to me.”) must occur spiritually in each of the members of his Church at every moment of every day.

Mary found the cure for all the spiritual and physical ills of the world in Christ. She shows that the power to become like God, which surely our creation with a spiritual soul demands of us, does not come from a domineering grasping but from surrender to divine providence. “Let it be done to me.” She discovers the sweetness of life to be in divine love. Thus, we say, “our life, our sweetness and our hope”. She becomes a model of the brightness of the divine glory which man shall experience in the resurrection in her luminous faith in her Son. Though she is blessed among women this is because of the blessed fruit of her womb, Jesus.

Mary exemplifies all the gifts of the Holy Spirit. She shows piety because as a bride she cries “Abba, Father” an expression of love to her spouse. She show wisdom because the angel reveals the final completion of the mystery of creation to her. Since she is married to the Trinity, she searches the depths of intimacy with them. She knows as God knows and loves as God loves. She shows knowledge because the angels instruct her in her own catechesis before her consent. She shows understanding because she has a right estimation of the things of this world including suffering. She demonstrates counsel when her first act on conceiving Christ is one of practical charity, taking care of an old pregnant lady. Her courage is manifest in the flight into Egypt and in her compassion with Christ culminating in her standing at the foot of the cross and offering herself with him. Finally, she shows us fear of the Lord because she preserves her chastity whole and inviolate not only in body but also in her soul throughout her life.

These gifts are also the source of virginity as a mother. As Christ is conceived though her faith by the Holy Spirit, but takes flesh from her body, she is intimately involved in all he does in his body. This includes approving of both his power and his teaching. Mary stands as the simple answer to all heretical teachings. Her virginity is one of the intellect as she believes completely and shares completely in all the acts of her Son. A favorite title for her in the Middle Ages is the “hammer of heretics”. Simplicity defeats complexity every time.

It is an attractive thought that because she does not have original sin, she does not suffer in anything natural. She experiences no pain in childbirth and if she did experience a kind of death, it would not be a painful one involving suffering. It would be like a gentle sleep such as occurs in the fairy tale Snow White. But, of course, she does suffer intensely in life and so she can sympathize always with us. All her sufferings are connected with the Passion of her Son which is the origin of the famous teaching of the Seven Sorrows. It is always good to remember that the flesh of Jesus which was so wounded in the terrible death on the Cross came from her body. Each wound of Jesus wounds her spiritually. Each rejection and false
accusation affects her tremendously.

She also shares in the resurrection of the body which is reserved to the rest of the human race until the end of time. It would be unfitting for her pure body to be corrupted. So the ancient source simply says that she was buried, and then Thomas after three days arrived and wanted to see the body, and the tomb was empty. This teaching is reflected in the Eastern Church when the feast which celebrates this is called the “Dormition” or “Sleeping” of Mary.

So when people point to the errors or sins of people in the Church and say that this shows that the Church is not holy, one can counter with Mary and her life. She is the beacon which reflects the light of Christ and shows us how to live a truly human life. She is the great sign in heaven of what God created the world to be. So she is happy! “Daily, daily sing to Mary, sing my soul her praises due. All her feasts her actions honor with the heart’s devotion true. Lost in wondering contemplation, be her majesty confessed. Call her mother call her virgin, happy Mother virgin blest!”

Written
Read time
9 min read
More posts
The Importance of Intimacy
What would the Blessed Virgin say about PRAYER
The 10 Commandments – The 3rd: “Remember the Sabbath, Keep it Holy”
Category
Features