Multimedia Blog The Church’s devotion to the Blessed Virgin Mary

The Church’s devotion to the Blessed Virgin Mary

[Bishop-elect Robert Christian, O.P. entered the Dominican Order in the Western Dominican Province in 1970. He was ordained a priest in 1976. These past few years, he has served as Student Master of the Western Province. Bishop-elect Christian was appointed an auxiliary Bishop of San Francisco by Pope Francis on March 28, 2018. He will be ordained bishop in the near future.]

The Church’s devotion to the Blessed Virgin Mary is shown in many ways, but one of the more subtle is that Mary can be celebrated liturgically every Saturday in the “Ordinary Time” of the liturgical year unless that Saturday happens to be taken by another obligatory memorial or feast. This means that on perhaps half of the total number of Saturdays in a calendar year, Mary can be specially honored. 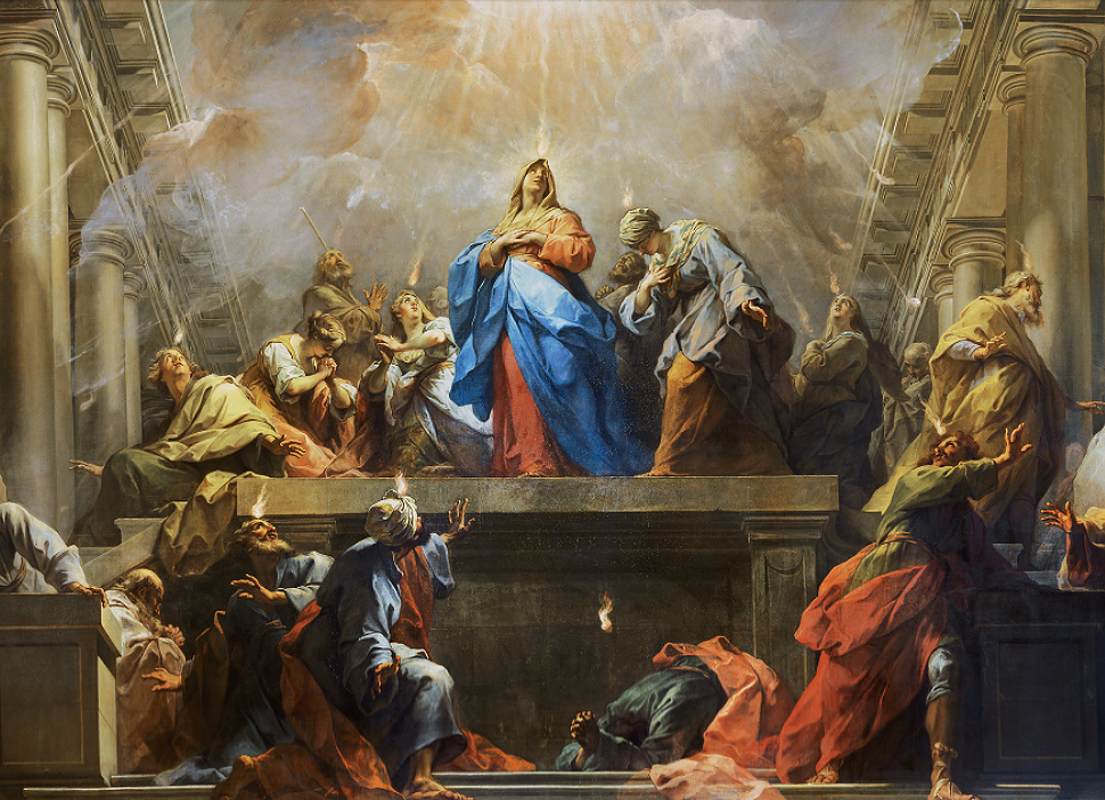 The reason for giving special tribute to our Blessed Mother on Saturdays is one we have meditated on especially during the seasons of Lent and Easter. On Holy Saturday, when Jesus lay in the tomb, with His apostles gripped by fear, Mary alone maintained faith in her Son. It is said that the Church’s unfailing faith was found only in Mary during the time of the Crucifixion and Jesus’ burial. This “infallibility in belief” was not, of course, comparable to the infallible teaching office of the College of Bishops or its head, the Pope. It was not an infallibility that resulted in her articulating dogmas. It was, instead, a tenacious clinging to what her Son had revealed, a clinging made steadfast by virtue of the fullness of grace that she enjoyed.

When, therefore, the Church sings Stabat Mater during Lent or on the memorial of Our Lady of Sorrows on September 15, she is mindful of much more than the poignant grief of a mother for a son executed despite his innocence. Indeed, the Church is extolling a faith that did not waver, even though what that faith promises seemed utterly divorced from the scene of Jesus’ ignominious crucifixion between
two criminals.

Our faith promises us the resurrection from the dead. It promises us an eternal life which will seem like an ecstatic instant, but will be in fact unending. We believe that if we follow Jesus, heed His commandments, and welcome Him into our lives in the sacraments, we can live with Him in the communion of saints, enjoying perfect beatitude.

But when we look at Mary, we recognize that the hope to which our faith points is also a hope sorely tried. In Mary’s case, the trial was uniquely acute: she saw the object of all hope, her Son Whose name means “One who saves,” die and be laid in a tomb intended for someone else. We would understand it if she were to grieve because her hope came to nothing. But instead, while the Sorrows of Mary are real, and Mary’s anguish was genuine, she did not lose hope where everyone else did. Even though her Son was dead, Mary believed in His coming victory. The Church’s charism of infallibility in belief was maintained in Mary even on that darkest of days, Holy Saturday. And so, we remember Mary not only when we commemorate her triumphs, as in the decades of the Rosary dedicated to the Annunciation, the Visitation, and her Assumption and Coronation. We remember her most frequently in our liturgical calendar on Saturdays; we imagine her holding fast to what she believed despite what seemed like invincible evidence to the contrary.

We have the advantage that Mary did not, of knowing that Jesus rose from the dead, that He ascended to the right hand of the Father, and with the Father sent the Holy Spirit upon the apostles and Mary, the initial cell of the Church, at Pentecost. We are able to ponder God’s word and receive the sacraments Christ instituted to make the saving effects of His cross a living reality in all the baptized.

Nevertheless, we can be plagued by doubt and incredulity when afflicted by trials. We are acutely aware that events beyond our control can seriously threaten our perseverance in the faith. When someone manages to persevere in the faith despite mortal challenges, we are impressed by that person’s martyria or witness, and we perhaps wonder if we could be martyrs in similar circumstances.

At this time, we think of the plight of Christians in many countries of the Middle East. Thousands have fled their homelands. Others have remained to face persecution or even death. We in the West rarely, if ever, hear of Christians renouncing their faith in Christ even when fidelity to Him can lead to a loss of life. We hear, instead, of their heroic fidelity. They stay with the cross, carry the cross, and invoke the intercession of the Mother who stood resolutely (Stabat Mater) at the cross. The twentieth century was called the century with the most martyrs in the history of Christianity, and the twenty-first century is off to an equally bloody start. Mary’s calm perseverance indicates her persevering intercession on behalf of all who belong to her Son.

In the West, we are now witnessing a growing hostility to any expression of Christianity that, in order to remain faithful to Christ, challenges the mores of an increasingly secular and individualized society. We are most familiar with this phenomenon when we think of asserting the right to life of every human from conception to natural death, but anyone who stands with the Church on issues ranging from the nature of matrimony to the human rights of immigrants knows the cost of martyria, of standing at the foot of the Cross like Mary. And some believe that the cost of fidelity will only grow.

Speaking a few years ago to a group of priests, entirely outside of the current political debate, I was trying to express in overly dramatic fashion what the complete secularization of our society could bring. I was responding to a question and I never wrote down what I said, but the words were captured on somebody’s smart phone and have now gone viral on Wikipedia and elsewhere in the electronic communications world. I am (correctly) quoted as saying that I expected to die in bed, my successor will die in prison and his successor will die a martyr in the public square. What is omitted from the reports is a final phrase I added about the bishop who follows a possibly martyred bishop: ‘His successor will pick up the shards of a ruined society and slowly help rebuild civilization, as the Church has done so often in human history.’ What I said is not ‘prophetic’ but a way to force people to think outside of the usual categories that limit and sometimes poison both private and public discourse.

Most of us are tested in less public, but no less painful, ways. When afflicted with a painful and debilitating illness, even the most pious Christian can begin to despair of God’s mercy or even of His existence. For precisely this sort of situation, the Church has a remedy both practical and supernatural—in fact, practical because it is supernatural, namely, the Sacrament of Anointing of the Sick. The theological virtue that St. Thomas Aquinas associates with this sacrament is hope, the hope that enables one to see in the cross a sign of triumph over sin and death: the hope that Mary had on that first Holy Saturday.

The Sacrament of Anointing of the Sick is intended for the living, preferably those who are well enough to participate in the liturgical action. Priests and bishops, who are the only ministers of this sacrament, should be called to administer it in sufficient time in order to allow the sick person to feel, even physically, the consoling comfort of the Church’s rite. And it should be remembered that the Church holds that if Christ wills for the sake of the sick person’s spiritual healing that he or she undergo a physical healing of some kind, it may occur.

Besides persecutions both blatant and subtle, and end-of-life challenges, there are many situations that prompt us to see in Mary’s constancy a model for our own spiritual behavior. In a world where the latest addictive plague has made us familiar with the word opioid, where homeless people—often mentally ill—live and die on our city streets, where families know the wrenching pain of divorce, and where many find it difficult to believe in the goodness of a provident God, it is clear that the image of Mary we recall on Saturdays is an image of our own suffering. As Pope St. John Paul II wrote in his encyclical on human suffering issued on the World Day for the Sick, the Memorial of our Lady of Lourdes, February 11, 1984:

It is obvious that pain, especially physical pain, is widespread in the animal world. But only the suffering human being knows that he is suffering and wonders why; and he suffers in a humanly speaking still deeper way if he does not find a satisfactory answer. This is a difficult question, just as is a question closely akin to it, the question of evil. Why does evil exist? Why is there evil in the world? When we put the question in this way, we are always, at least to a certain extent, asking a question about suff ering too.

Mary, ever free from sin, teaches us that suffering, an involuntary separation from or deprivation of the good, afflicts us all. Even she was deprived of the presence of her Son. But her steadfastness likewise reminds us that when we purify and refine our sense for what makes us truly happy, so that our answer is only Christ, Christ will find us. If we seek Christ, Christ will meet us. Christ’s initiative is seen in the sacrament of Penance, in Eucharistic communion, and in the Anointing of the Sick. The One Mary sought is truly risen, and finds us watching like Mary for Him.