Multimedia Blog The Miracle of Lourdes

The Miracle of Lourdes

It was the summer of 1988. The Marian Year was drawing to a close. I was just a few weeks shy of entering the novitiate of the Western Dominican Province. So, I planned a Marian pilgrimage with my brother Larry (who also became a priest), which covered Fatima, Lourdes, Rome and Medjugorje in three short weeks. 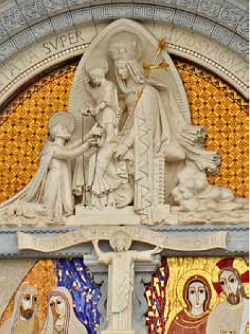 I had yet to learn much about St. Dominic; but I remember that everywhere I went on pilgrimage I discovered a statue or an image of St. Dominic displayed in a prominent place. I remember especially the image of St. Dominic on the façade at the entrance to the main basilica at Lourdes. He was kneeling and receiving the rosary from the Baby Jesus and the Queen of the Most Holy Rosary.

Since then I have learned much about the rosary itself. Many people question the use of devotional prayers, claiming that they cloud our focus on Christ. But the rosary is the Gospel Prayer: when we pray it, we enter into the sacred mysteries of the life of Jesus Christ and his Blessed Mother. Traditions that lose their meaning in the Church, die out over the centuries. The rosary is as strong as ever—perhaps because it is a prayer that focuses on Christ and the grace-filled life that he lived for a short time on earth. When we pray it, the Blessed Virgin joins her prayers with ours.

On that pilgrimage, I will never forget the Living Rosary that we prayed on a hot July summer night at Lourdes. There were tens of thousands of pilgrims—perhaps as many as 50,000 that night. As we walked through the darkness with our lit candles and prayed the rosary in five languages, while singing the Lourdes hymn at the end of each decade, chills went down my spine. And as we sang the refrain all 50,000 of us raised our candles in unison in the air. It was a sight to behold.

Why were we all there? What were we hoping to experience? What were we searching for? I remember seeing many, many very ill people pushed in wheel chairs by volunteers. Lourdes was teeming with the sick and the dying, seeking Mary’s intercession in their lives; seeking the healing power of the living God who has chosen to work his miracles through a humble, simple maiden that said “yes” to his request to be the Mother of his Son.

Exactly 130 years prior to that occasion, at that very same place, another simple, humble girl was out doing her daily chores gathering firewood for the family hearth when a blowing wind nearby grabbed her attention. Turning, she saw a lady dressed in white at the grotto of Massabielle, with a rosary in her hand. Over the next several months that lady, the Blessed Virgin Mary, would appear to Bernadette Soubirous, and give her several requests, i.e., to dig under a nearby rock and to drink from a spring that initially was only a trickle of water and mostly mud, to have a church built upon that very spot, and to tell the priest who asked her name, “I am the Immaculate Conception.”

The young 14-year-old peasant girl could never have understood the dogma defined only four years earlier in 1854 by Pope Bl. Pius IX that proclaims that the Blessed Virgin Mary was, from the first moment of her conception, by a singular grace and privilege of almighty God and by virtue of the merits of Jesus Christ, preserved immune from all stain of original sin. (Ineffabilis Deus, DS 2803)

In retrospect, the apparitions at Lourdes still pose a challenge to many. Supposedly, Massabielle was a garbage dump before it became famous as being the grotto where the Blessed Virgin Mary appeared. This was a point of contention by the civil authorities at the time who doubted the veracity of the apparitions. They asked how the Virgin Mary could chose such a profane place. But keep in mind that the Messiah was born in a stable and afterwards was laid in a feeding trough that had been used for barnyard animals! When the sacred enters the profane, it sanctifies it.

St. Bernadette has many of the attributes of those chosen by the Blessed Virgin Mary over the centuries, e.g. the children of Fatima, St. Catherine Labouré, San Juan Diego, the children of La Salette, etc. They all have been humble people who are simple, detached, without guile, chaste, obedient, faithful, and dismissed by the world as being insignificant. All of these characteristics (and more) represent the Blessed Virgin Mary herself.

I want to dispel the romanticism surrounding the 14-year girl that the Blessed Virgin Mary appeared to at the grotto of Massabielle. From the day that the apparitions began until the day she died, St. Bernadette suffered tremendously both spiritually and physically. She was chastised by civil authorities, by some ecclesiastical authorities and by many, many people who thought she was a fraud. In many ways, she reminds me of the virgin-martyrs of the early Church. Like them she proved victorious over those who were more sophisticated, brighter and had more standing in the world. If you have noble aspirations of following the example of St. Bernadette, you will need the heart of a lion and a faith that moves mountains.

In the 150 years since the apparitions, many people have tried to debunk or take advantage of the Lourdes story. Early on scientists were commissioned to study the water with the hope that it could be bottled and sold because of some supposed rare healing properties; but, in the end all they could conclude was that it is pure spring water. However, our Church is an Incarnational Church where the Lord himself blesses us through sacraments that use pure elements of the earth, touched by the divine, to cleanse, feed, and heal us and deepen our faith in Him.

If pure water from the earth (or from the heavens) can be used with the baptismal formula to wash away our sins and make us children of God reborn in the image of Jesus Christ, perhaps some water bubbling up from a spring near a grotto, mixed with a little mud and a little faith can also work miracles.

Written
Read time
6 min read
More posts
The 10 Commandments – The 6th: “You Shall Not Commit Adultery”
INTERCESSION: AN ESSENTIAL ASPECT OF THE CHRISTIAN FAITH
A Mystery in Mysteries
Category
News